January 29, 2018
The sculpture of mitochondria and endoplasmic reticulum I was working on in my last post is now finished and framed. 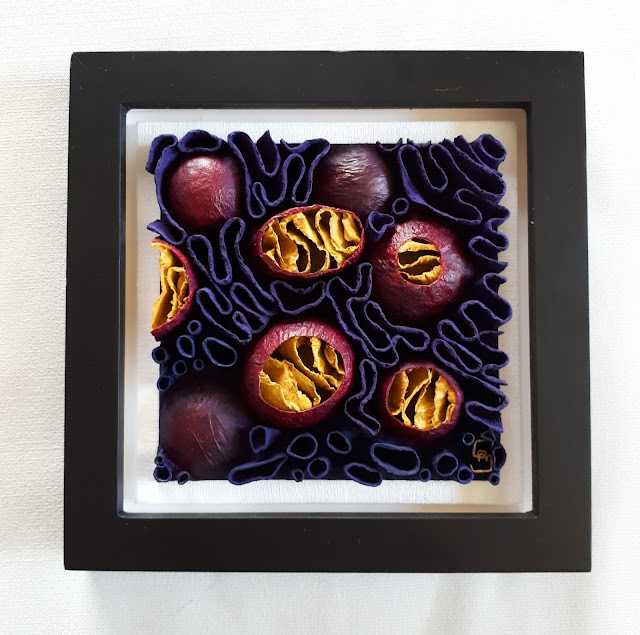 Here are some of the mitochondria in close up, with their internal structure visible the way they frequently are in samples prepared using a cryofracture or freeze fracture: 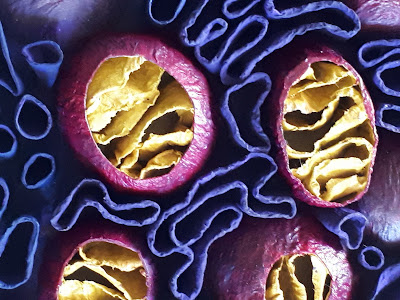 The colour scheme is entirely based around a jar of Egyptian Violet that I couldn't resist buying, but it reminds me of a Terry Pratchett quote about anatomy:

"I thought I’d show everyone what I’m made of. And now they’ll probably find out: I’m made of lots of tubes and greeny purple wobbly bits."

I have two more of these frames, and eventually I want to complete a series of these sculptures looking at different aspects of cellular biology.  My colleague points out that the mitochondria would look great with EL wire inside them, so that's something to keep in mind for the future.
Finished projects Relief sculpture 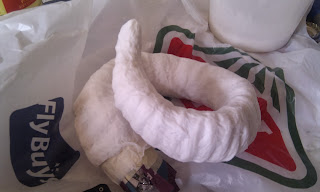 Texture is very important in sculpture.  Getting the overall shape how you want it is obviously important, but it's the texture that makes the difference between a result you're proud of and something that just isn't quite right.  However, you probably don't want to spend hours and hours getting exactly the right texture on something intended to be a quick and easy Halloween costume component.  I know I don't!  fortunately, this isn't a problem.  There's an easy and quick way of getting a decent texture on horns using paper mache, and today I'm going to show you how it's done.
You start by getting a toilet roll and wrapping it from one end of the horn armature to the other.  The coils of bog paper can be uneven and scruffy; this is fine.  As I explained in the last post, the horn armature is simply a length of kitchen tinfoil twisted into shape, with a bit of glued paper over top.


Next, you want to spread thin glue all over the coiled paper.  I've… 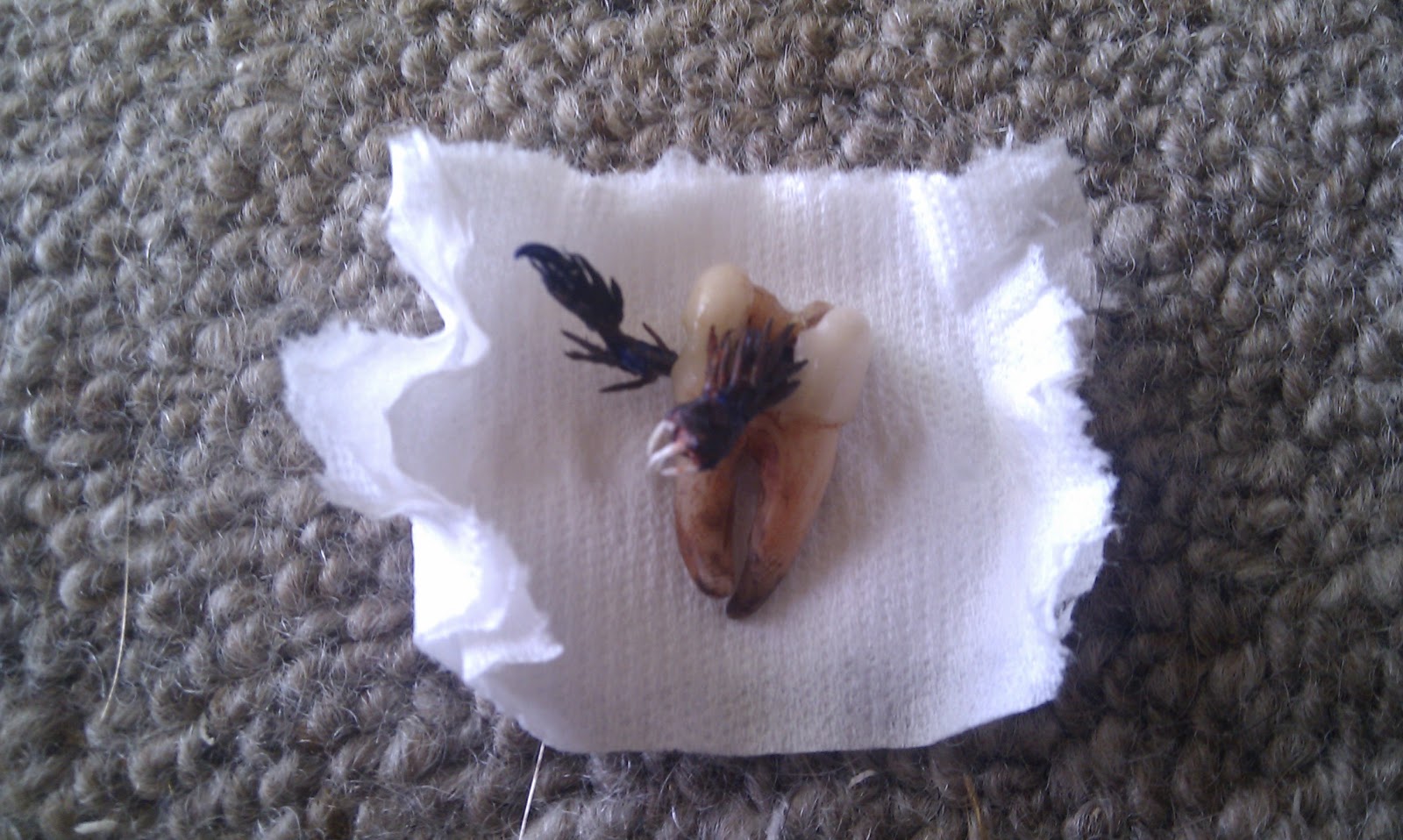 We all know oral hygiene is important, and the above picture illustrates why it's so important.  Tooth worm eggs get stuck between the teeth, where they hatch out into little worms like this and burrow into the teeth, unless they're removed by proper brushing and flossing.  This specimen, as you can see, has completely eaten away the tooth it was found in.


Remember to floss folks - you don't want one of these little sods gnawing on your molars.


Before the development of germ theory, it was commonly believed that tooth decay was caused by tiny worms, imaginatively known as "tooth worms".  The tooth worm myth has a lot of appeal for me, because it's actually a fairly good attempt at explaining tooth cavities given the science available at the time.

As early as 5000 BC people were observing the little holes made by tooth decay and hypothesizing that microscopic worms, perhaps similar to woodworm, could be the culprit.  They weren't able to test this hypothesis,… 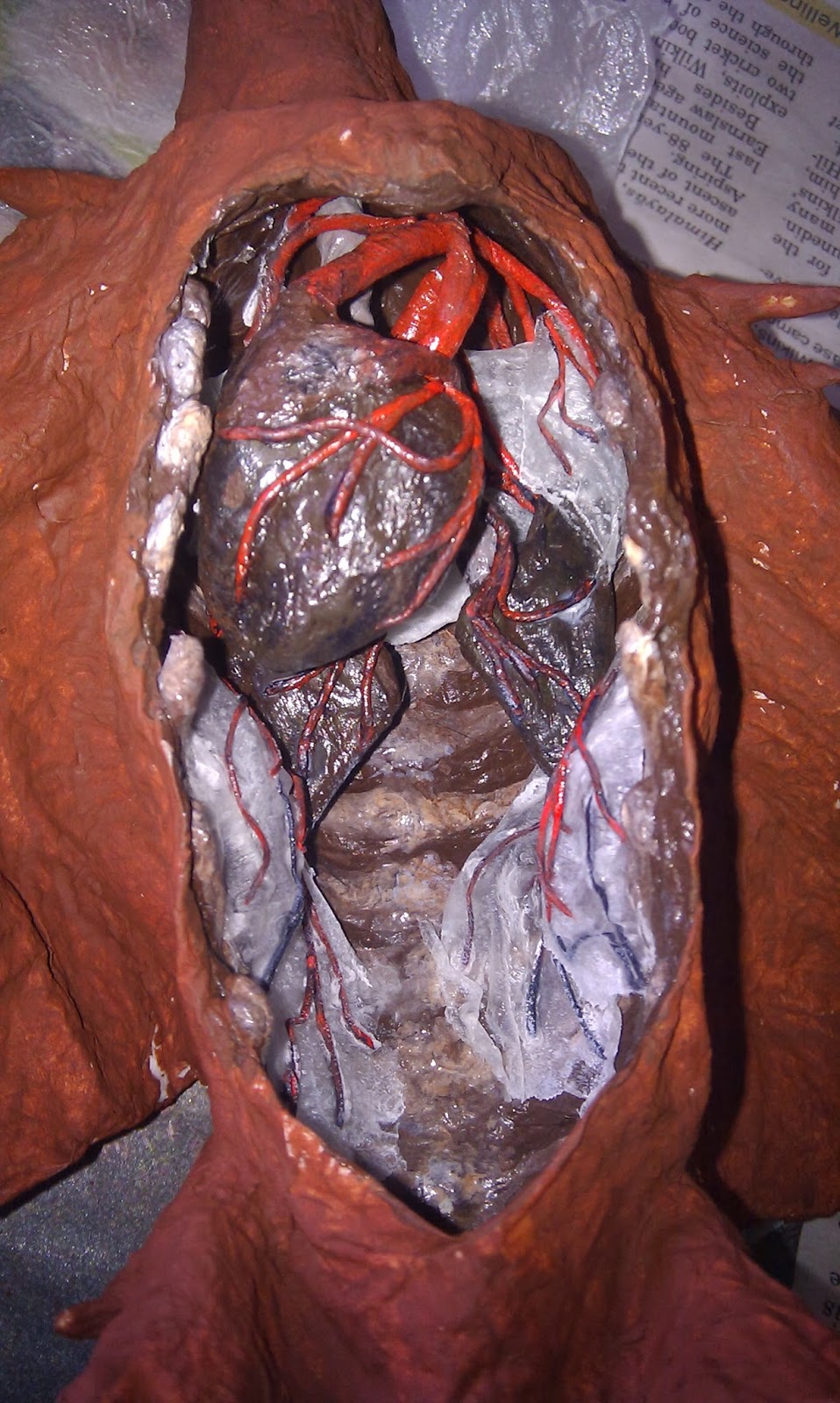 Yes, you can make translucent membranes with paper mache

Last time I discussed my dragon project, I'd finished the lungs and needed some air sacs to go with them.  Bird air sacs are basically membranes, and membranes are basically translucent.  Paper isn't.  Therefore, I had to make the paper translucent.  You can do this by rubbing grease on it (remember Dr Nick from The Simpsons: "if the paper turns clear, it's your window to weight gain"), but grease was obviously out of the question.  Happily, grease isn't the only thing that turns paper clear.  Polyurethane will do it too.

What you're looking at there is a piece of toilet paper that's been coated with polyurethane.  It's not entirely clear, but it is translucent and also has a nice membranous texture.  Perfect.  Getting this effect is as simple as putting the paper on a sheet of plastic, brushing on a good thick layer of polyurethane, and letting it dry.  Once it's dry you can carefully peel it off the plastic sheet and you have your membrane.  …